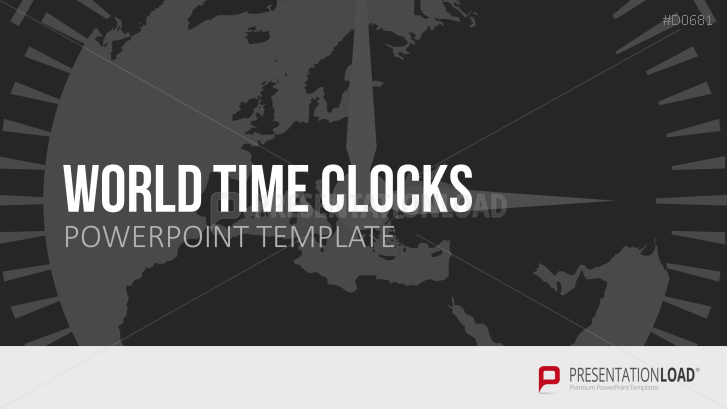 These PowerPoint slides contain clock graphics in different designs with which you can clearly display each time zone of the world and its corrosponding time difference.

The earth is roughly divided into 25 time zones that resemble each time and place the sun reaches its zenith or direct vertical point. Starting with the "Prime Meridian“, the imaginary line connecting the north and south pole passing through the London borough of Greenwich, each zone is set at regular intervals around the globe. In the UK and large parts of West Africa, it was called "Greenwich Mean Time" (GMT) and was later changed to "Coordinated Universal Time" (UTC). From this "zero" zone the clock is set one hour ahead per zone eastbound, or one hour back westound.

Clock graphics are handy for representing the current time in different locations of your company simultaneously. Telephone or video conferences can be coordinated more quickly, and such a juxtaposition gives your employees a better idea of what time they can reach certain colleagues in the office.

Go even further by designing the clock face with a silhouette of the respective country. Our PowerPoint template offers you clocks in several forms, as well as the ability to customize the design of the dials. Other elements of this toolbox can help in creating your presentation. For example, a schematic illustration of Earth with its time zones and other motifs can be used as an eye-catching transition slide.